> Blog > Our Legacy, Our Future

Our Legacy, Our Future 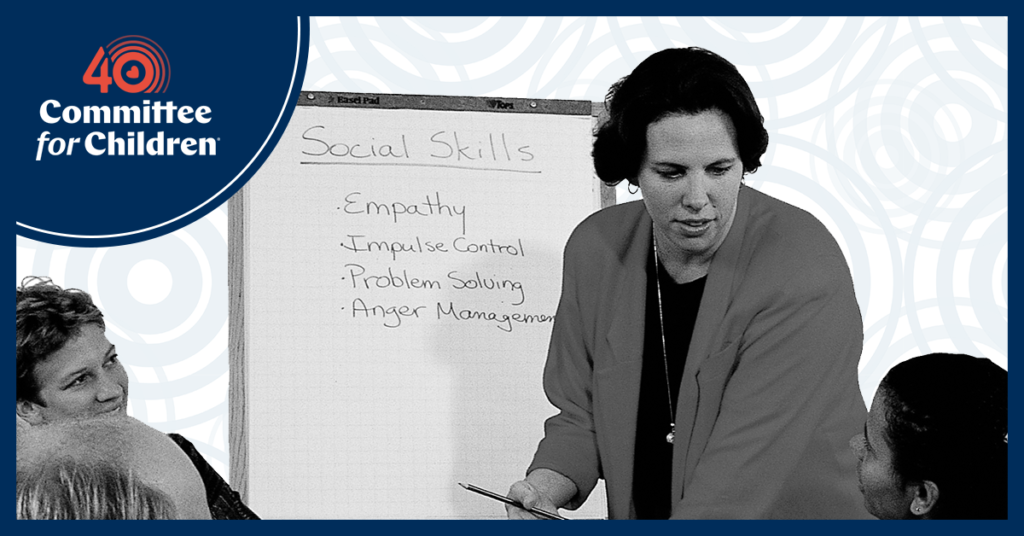 We sat down with Committee for Children’s (CFC) Executive Director, Joan Cole Duffell, to talk about CFC’s grassroots beginnings, its audacious ambitions for the future, and why social-emotional learning (SEL) is more important than ever.

My parents come first to mind. They taught their children (all seven of us!) to live life in service of others—they were of the mindset that it’s our job as humans to leave the world a better place than we found it. Then early in my career, I worked as a kindergarten teacher in a treatment center for young kids who had experienced high degrees of trauma. I was struck by how few skills they had for coping with the slightest provocation—these children didn’t have the ability to self-manage or self-soothe. At the time I wasn’t aware of SEL, no one was, but I didn’t feel like I was giving those kids what they needed. Working closely with so many young children who had been affected by trauma shaped my thinking about the work I wanted to do. It showed me firsthand the importance of preventative action and focusing on teaching kids the key social-emotional skills they need to thrive.

The Early Days at Committee for Children

CFC’s prevention-oriented mission spoke to me, and I knew I had to be a part of it. At the time, CFC was focused on preventing future abuse through its first program Talking About Touching, but it wasn’t preventing the abuse from happening in the first place. We recognized that to truly prevent abuse in the here and now we had to look at the skills people needed to avoid becoming abusers in the first place: empathy, impulse control, problem solving, and emotion management—skills the kids I’d worked with early in my career had needed so desperately.

In the beginning we were a small but mighty team that was largely populated by volunteers. People were there because they believed in the mission and wanted to roll up their sleeves and get to work. That meant answering phones, stamping envelopes, and assembling curriculum binders in someone’s garage. We were truly a scrappy little startup, before the word startup even existed.

Embracing Change While Staying True to Committee for Children’s Roots

Looking back 40 years, so many things have changed. For one, we use email over handwritten letters (yes, we were here before the internet). Our small but dedicated group has grown into more than 150 people working in high-functioning teams that collaborate to build multiple programs simultaneously. We now think more strategically about reaching children in multiple domains of their lives. And we live at a wonderful intersection between academic rigor and practical implementation. The combination of those two things is very powerful.

What hasn’t changed is the camaraderie and unified belief in the mission—we’re all here because we’re dedicated to making life better for kids. It’s the tie that binds the years together. There is also an enduring commitment to research and to measuring our impact. We create our programs based on research and then validate them through reverse evaluation. It’s our hallmark and it precedes my time here at CFC.

I’ve been in this field a long time, and I’ve never seen the education fields so strongly embrace the idea of SEL. Ten years ago it was hardly on the radar, and now you see SEL as a main theme at every education conference. The world is finally recognizing the power of SEL, and that leaves us with a lot of reasons to be optimistic right now.

Our legacy will be a new generation of kids with skills, competencies, and perspectives to operate in a different way, a better way, a more humane way. We’re teaching a generation to be better humans operating in the world, which will make the world a better place.

One thing I love about this organization is that, even though we’ve achieved incredible things and there is more acceptance of SEL than ever before, we’re never going to sit back and say we’ve done enough. We want to do more; we want to deepen our impact and reach more kids by exploring new ways to achieve excellence.

So we started to think: what if we could make roughly ten times the impact in ten years? Can we positively transform the social-emotional well-being of 100 million children by 2028? Yes, we can. That goal has since become our North Star. We know it’s not going to be easy—nor should it be. While achievable, it’s a true challenge.

The Time to Advocate for Social-Emotional Learning Is Now

Advocacy is the most hopeful and achievable work we can do at a time when the world is seeking solutions for larger social needs. And SEL is the most powerful, affordable, sustainable, and practical solution to help children achieve social and academic success. Educators and youth program workers are the agents of change for this on the ground. But without policy change, they won’t have the support they need to teach SEL. For example, if a state doesn’t support SEL and only prioritizes test scores, then it’s hard for teachers to make the case for spending their time teaching SEL in their classrooms. Advocacy work is critical to make sure the right policies are set for educators to do this work in a strong, evidence-based way.

Our vision is to provide all children with the opportunity to learn these skills, so they carry them into adulthood. And eventually, when they’re the ones in charge, they’ll be able to show empathy and problem solve in constructive ways. This puts better and kinder humans at the table, and there’s evidence that SEL can help make that vision a reality.

We invite you to join us in positively transforming the social-emotional well-being of 100 million children by 2028. Become an advocate. Lend your voice. And let’s grow kinder together. Learn more.