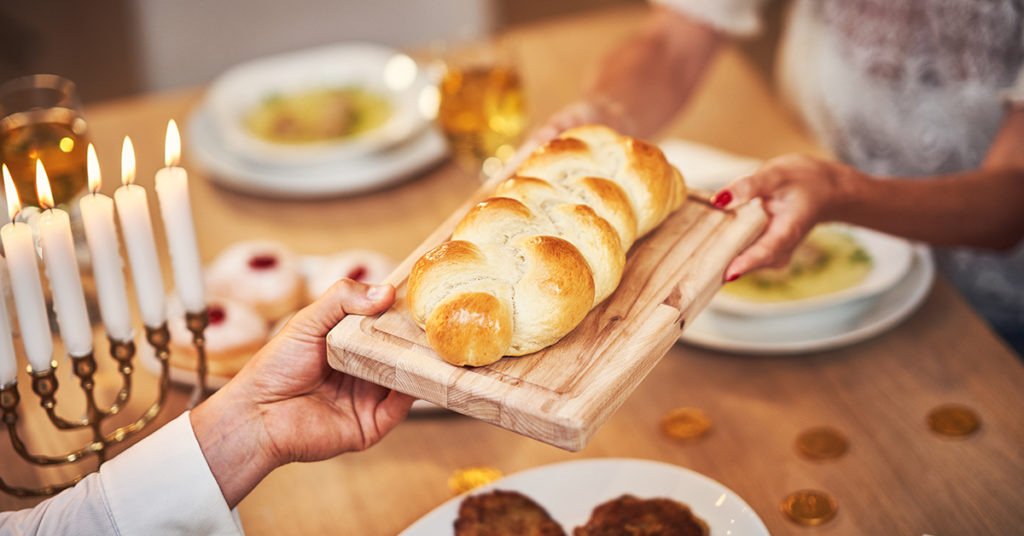 Hey, members of the tribe and all our friends: May is Jewish American Heritage Month.

Whether you identify as a member of the tribe or not, we invite you to celebrate with us. Have a bagel and cream cheese, chicken soup with matzah balls, or a sweet kugel in honor of Ashkenazi (Eastern European/German) connections. Then grab a bite of falafel or baba ghanoush for our Mizrahi (Middle Eastern) connections. And I’ll have some moussaka and a scoop of savory dafina, Moroccan stew slow-cooked with eggs-in-the-shell boiled right in, from the Sephardic communities that spread from Spain to Greece, Turkey, and North Africa.

If your mouth is watering, sorry, not sorry. Next year in Jerusalem, as we say.

If you’re getting the impression that “Jewish” isn’t a singular culture based on religious heritage—good. Our history is certainly bound up with religion and a partly shared past, including generation after generation of persecution. But along with tenacity, diversity and adaptability are also strengths of our people.

Wherever Jews have landed, whether by our choice or forced by others, we’ve adopted parts of the surrounding culture and made them our own. Thus rose the language of Yiddish, embracing and modifying German words and syntax into a modified Hebrew alphabet. Ladino did the same with the Spanish language, then spread after the 1492 Jewish expulsion from Spain to lands all around the Mediterranean Sea, where it picked up nuances in each place. And we’ve brought all of that to America, where we’ve adapted and borrowed even more.

Have you heard the one about the Jew stuck on a desert island? When he’s rescued, they find three buildings: his house and two synagogues. “Why two synagogues for one man?” the rescuers ask. “Ah,” says the man. “There’s the one I go to and the one I wouldn’t set foot in.” Maybe that’s a little strong. But here in Seattle, there are more than 15 synagogues, each one different. For example, in 1891 the Bikur Cholim synagogue was founded on Ashkenazi traditions; about 10 years later, a large Sephardic influx led to the founding of the Sephardic Bikur Holim Congregation. These two still sit across the street from each other.

There’s an old adage: two Jews, three opinions. Even when we agree about something, like the concept of Tikkun Olam, meaning “repairing the world,” we can differ about what is broken and how to fix it. Still, this concept, combined with a more-or-less shared history of persecution, has led many Jews into service-related fields and personal philanthropic ventures. I might be so bold as to suggest that it underlies personal values that led some of us members of the tribe to an organization like Committee for Children.

American Jews have contributed to general American culture throughout this nation’s history: stepping up to the plate like Sandy Koufax and Alex Bregman; writing books and music and performing from Broadway to Hollywood; and boldly standing up for others, from the poem on the base of the Statue of Liberty to standing with the civil rights movement to saying never again to genocides against any people.

*Please note, the above resources do not speak for all Jewish people.