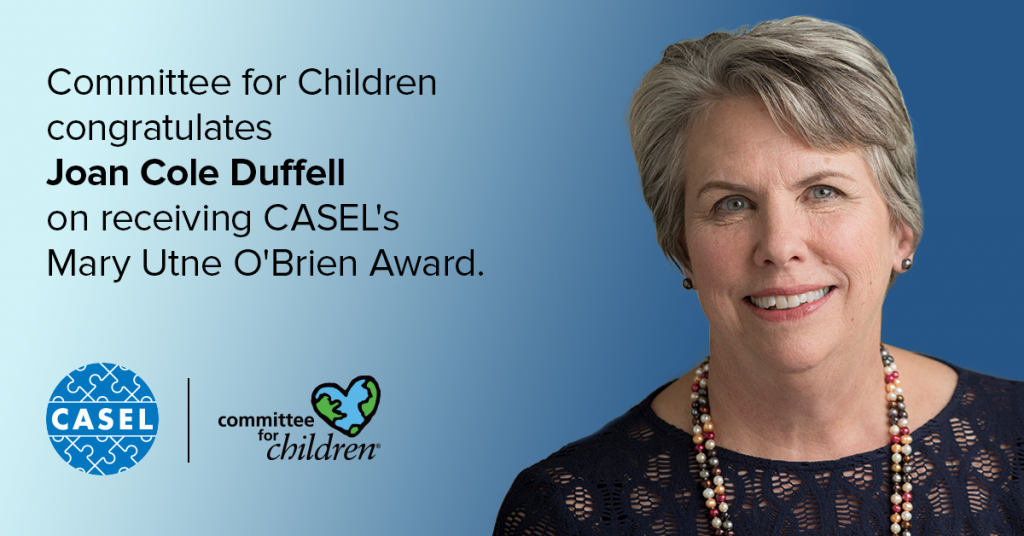 We at Committee for Children are so proud to announce that our very own Joan Cole Duffell is a recipient of the 2018 Mary Utne O’Brien award!

The prestigious Mary Utne O’Brien Award for Excellence in Expanding the Evidence-Based Practice of Social and Emotional Learning is presented annually by the Collaborative for Academic, Social, and Emotional Learning (CASEL). CASEL, a national organization dedicated to advancing the development of integrated academic, social, and emotional learning, established the award to honor the memory of its vice president Mary Utne O’Brien, who passed away in April 2010 after a battle with cancer.

“Mary was a wonderful person,” explained Duffell. “I have kept her picture on my desk ever since she passed in 2010. I am honestly stunned and deeply grateful to receive this honor from CASEL.”

“The C in CASEL stands for collaboration, and Joan exemplifies the values of collaboration—generous, tireless, and wise,” said Roger P. Weissberg, chief knowledge officer and board vice chair of CASEL. “The field of social and emotional learning has benefited from her leadership for many years.”

When Joan joined Committee for Children (CFC) in 1983, the organization totaled less than a dozen employees and volunteers and had not yet scratched the surface of its potential. Leading Committee for Children’s marketing and outreach efforts from 1983–2002, she soon changed the game to bring social-emotional learning to children and families across the globe. She worked tirelessly to develop strong partnerships with organizations and educational systems across the US, Europe, Asia, and Latin America.

But outreach soon came to be just one of her many highly skilled abilities. She has advised numerous Catholic dioceses and the US Conference of Catholic Bishops in their efforts to implement research-based sexual abuse prevention programs in order to establish safe environments for children in their care. Her advocacy team has actively collaborated with CASEL and state and district leaders to organize numerous speakers and panels for Congressional briefings, state legislative hearings, and “Hill visits”—to showcase the benefits of SEL to policymakers from a variety of perspectives. In 2013, she testified on behalf of Senate Bill 5563, which requires that new teachers receive training on how to recognize and prevent commercial sexual abuse and exploitation of minors. And she has authored and co-authored numerous book chapters and articles on SEL, character education, and related topics.

Joan is particularly passionate about Committee for Children “walking the talk” of social-emotional learning in their advocacy and partnership among colleague organizations in order to fully realize the organization’s vision: safe children thriving in a peaceful world. Exemplifying this, she serves on the board of directors of several nonprofits focused on education, early learning, and child well-being; she was co-chair of the Collaborative for Academic, Social, & Emotional Learning’s (CASEL) Program Provider Council; and she currently co-chairs the Public Awareness Committee of the National Coalition to Prevent Child Sexual Abuse.

And now, during Joan’s tenure as executive director since 2007, Committee for Children has become the global leader of research-based educational programs that promote social-emotional skills and prevent bullying and sexual abuse. 35 years after her very first day, Committee for Children has grown to over 100 employees, and its groundbreaking social-emotional learning curriculum, the Second Step Program, reaches more than 13 million students worldwide.

She is a powerhouse—and we are so happy she is our powerhouse! To commemorate Joan receiving the Mary Utne O’Brien Award from CASEL, the CFC staff created a video to celebrate Joan.

“When I think of Joan, I think of goodness,” CFC co-founder Debra Boyer said in a statement. “Joan has been able to do this work for 35 years because she finds the good and the promise in every situation and is always willing to recognize change and look forward.

“Establishing CFC was no easy task, and there is no way to measure all the good that has been accomplished for children under Joan’s leadership, but because of her, we know the most important thing—the ‘good’ will continue.”

“It has been a pleasure to work alongside Joan,” said John Hults, chief operating officer at Committee for Children. “Even after 35 years, she still possesses the same passion for achieving the mission this organization was founded on—to foster the safety and well-being of children through social-emotional learning and development.”

Joan has also received the Superhero for Washington Families Award from ParentMap magazine in 2010, as well as the Jack Morris, SJ, Lifetime Achievement Award from the Jesuit Volunteer Corps in 2013. She received this year’s O’Brien award alongside Tom Roderick, executive director of the Morningside Center for Teaching Social Responsibility in New York City, and Michelle Van Allen, who was principal of Chicago’s Marcus Garvey Elementary School until her sudden death earlier this year.

From all of us at Committee for Children—we are grateful to Joan for the wonderful work she does towards child protection, safety, and growth. Congratulations, Joan!