Check out our free COVID-19 response resources for educators, students, and families at secondstep.org/covid19support

> Blog > Then and Now: Our Origin Story
Committee for Children Blog

Then and Now: Our Origin Story 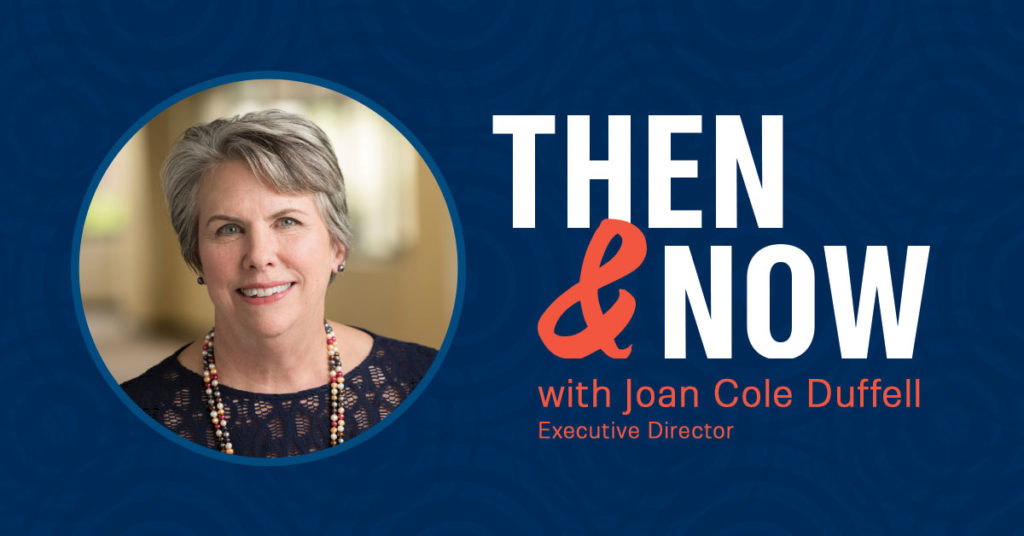 Committee for Children’s story begins in 1979, when two cultural anthropologists at the University of Washington determined that child sexual abuse often led to sex trafficking in adulthood—and they decided to do something about it. Founders Dr. Jennifer James and Dr. Debra Boyer created Talking About Touching, a program designed to empower children to recognize, resist, and report sexual victimization. Over the past four decades we’ve broadened our scope to child protection and bullying prevention resources, as well as our flagship social-emotional learning (SEL) program, Second Step.

In recognition of Child Abuse Prevention Month, we took the opportunity to sit down with Committee for Children (CFC) Executive Director Joan Cole Duffel to talk about the organization’s roots in abuse prevention, how our efforts have evolved over the past four decades, and why there’s no such thing as a finish line when it comes to child abuse protection.

Committee for Children was originally funded in the early 80s by the Junior League, United Way, and a Good Neighbor grant from Boeing—at the time, we thought of ourselves as just a locally backed organization working to prevent child sexual abuse on a local level.

That was the heyday of the feminist movement, and there was a lot out there in the ether about girls learning to stand up for themselves and take charge. Those were the right ideas, but most people didn’t understand how kids actually learned those skills. Telling kids to stand up for themselves is all well and good, but it doesn’t teach the child how to go about doing it.

It was a visionary move on our founder’s part to work with pedagogues, not just ideologues, on the underpinnings of our first program, Talking About Touching. It was the fact that they started with scientists in the University of Washington’s education psychology department who looked at research-based practices to determine what it would take to teach these skills to kids that set us on the right path to becoming a nationally significant program. But they didn’t know that’s what they were doing at the time. They just wanted to do the right thing and to do it well.

They also teamed up with folks from the Office of Superintendent of Public Instruction, who truly understood educators. What would it take for them to be able to teach the program? That nexus of research-based rigor with practicality was key—how do you create something so simple that a teacher can do it in the midst of the chaos of the classroom? That’s been our secret throughout: engineered simplicity combined with rigor in design.

When the call came in from the Today Show in 1983, we could hardly believe it. Producers had come across a documentary from a local NBC affiliate in Nashville (our first major client outside of Seattle) on child sexual abuse that showed us teaching Talking About Touching, and they wanted us to come on their program. We were all so excited, but I don’t think we realized what it would mean to go on national television.

There were only three or four of us in the office at that time, and the phones didn’t ring very often. After the Today Show, it was like a switch flipped. We received about 400 calls in two hours the day it aired, and there wasn’t voicemail then, so the poor secretary had to take down every message by hand. All she did for two days was take messages. The calls came from across the country, everything from parents looking for individual help to educators wanting to bring the program to their community.

The level of interest and acceptance made us realize how critical an issue this was, and that we had touched a nerve. We hadn’t thought the country was ready for a program like this, but we were wrong.

We decided it was time to develop a real marketing strategy. United Way loaned us an executive who helped create a campaign. Because most of the calls that had come in were from school nurses, we used grant funds to buy a mailing list of schools. We figured that once people saw the program in person, they would understand that it was about safety, not sexuality. We produced professional copies of the program, replacing the black-and-white images in a laminated sleeve with embossed binders and printed copy, and sent a free copy of the curriculum to anyone who sent a card back to us from our initial mailing.

School nurses turned out to be incredible advocates for the program, as there really weren’t “Health Ed” people in grade schools at that time. Our first major breakthrough was when the Los Angeles Unified School District ordered the program. Two things happened: One, we were able to see how the program worked in a big district and how the community reacted to it. And two, we were suddenly able to afford things like an 800 number (without one, a school couldn’t call us long distance because of the cost).

We spent a lot of time in the early years trying to elevate issues of child abuse prevention and protection, including training teachers and parents on how to have these conversations. There was something of a cultural moment of awareness in the late 80s and early 90s, but I’ve noticed that a new generation of parents has come along who don’t necessarily have that same awareness. I’ve learned that our work is never done in child protection. There will always be parents who need to learn how to talk to their kids and educators that need to learn how to identify and report.

That said, we have seen success in preventing child abuse, much of it stemming from policy change. We’ve seen the implementation of mandated reporting, meaning anyone who is paid to work with children has a legal obligation to report abuse, and suddenly there was a liability created for schools. That changed a lot—schools and districts started seeing abuse as an issue that required closer attention.

Survivors of abuse have also helped to change laws. Erin Merryn, founder of Erin’s Law, made a huge impact by highlighting the need for teaching kids skills using an evidence-based program, which aligned with our approach. In the world of sexual abuse prevention, we’re in the “do no harm” business—our programs have to be incredibly thoughtful to avoid unintentionally damaging kids or creating undue anxiety. Because our programs have always been research-based, and later evidence-based, we were well positioned as laws of that nature came into being. Now every state has muscle at the state level going into this area of child protection.

In light of the #MeToo movement and recent stories spanning Larry Nasser to the Catholic Church, people are being reminded that child sexual abuse happens, and it can happen close to home. They are being reminded that there are vulnerable children in every stratum of society, and prevention is vitally important—dealing with the fallout is much worse.

When sexual abuse occurs, people ask, “How could this have been prevented?” Well, that’s the work in front of us. But the good news is that there are effective ways to prevent abuse. There are more advocates today than ever before, and it’s heartening that there has been an actual decrease in the prevalence of incidents over the past 30 years.

It’s difficult to pinpoint causation, but when you look at the gestalt, and what’s changed over the last three decades, we now have mandated reporting in every school; Erin’s Law is in effect in half the states in the country; and prevention campaigns like our Hot Chocolate Talk are working to reach millions of parents and encourage them to talk to their kids. Policy and education programming are proliferating now in a way they weren’t 30 years ago. Can you draw a direct line between these actions and lowered incidence of abuse? No. But it gives me a lot of hope.

Some people in the field of prevention get concerned that if we talk too much about the decrease in incidents of sexual abuse, we run the risk of people thinking the problem is taken care of and we can stop prevention efforts. But I think it’s quite the inverse. If you could reduce smallpox by 30 percent, wouldn’t you want to keep working on a prevention strategy and get that number to zero? I think it’s a message that needs to be shared—that what we’re doing is working. Not just at Committee for Children, but by organizations across the country.

We revised Second Step in 2011. Before that, the program was divided into three distinct components—SEL, Bullying Prevention, and Child Protection—that didn’t necessarily relate to one another and could be a challenge to teach separately.

Researchers from the University of New Hampshire’s Crimes Against Children Research Center encouraged us to integrate a Child Protection Unit (CPU) into Second Step, using social-emotional learning (SEL) as a foundation for teaching these safety skills. That was incredibly useful feedback—these were academics whose life’s work was driven by protecting kids from abuse. It’s an excellent example of why we can never do this work alone, no matter how much expertise we bring into our organization. Our best bet is to work with field-level colleagues who challenge us to think differently.

My hope is for parents to keep in mind that talking about “people safety” is no different than talking about wearing a bike helmet or crossing the street safely. It’s very difficult for children to report abuse, but it’s far easier if a conversation has already happened that sends the child the message that they don’t have to keep secrets. And when a child has strong social-emotional skills, they have an even greater sense of personal agency to tell when something inappropriate has occurred.

One of the biggest gaps in changing the trajectory of sexual abuse is parents being afraid to speak up. Getting adults to do the right thing in the face of potentially serious social and legal consequences is tough, so it’s equally important to train adults to not just be receptive, but to take action.

Child sexual abuse is something that must be addressed on every front—you change a culture by doing many things at once. Our foundation of SEL is incredibly important to this theory. We’re teaching young children empathy and how to manage emotions and solve problems. As kids learn these skills, they learn how to not be victims or victimizers. It’s not just the teaching of child protection skills, but also the teaching of social-emotional skills that I think holds some of our best hope for changing society.

Child sexual abuse is a scary thing. But talking about it doesn’t have to be. For tips on talking with your kids, establishing safety rules, and recognizing the signs of sexual abuse, visit HotChocolateTalk.org