> Blog > When Bullying Is Racially Motivated: Recognizing It for What It Is and Supporting Kids to Be Anti-Racist Upstanders
Committee for Children Blog

When Bullying Is Racially Motivated: Recognizing It for What It Is and Supporting Kids to Be Anti-Racist Upstanders 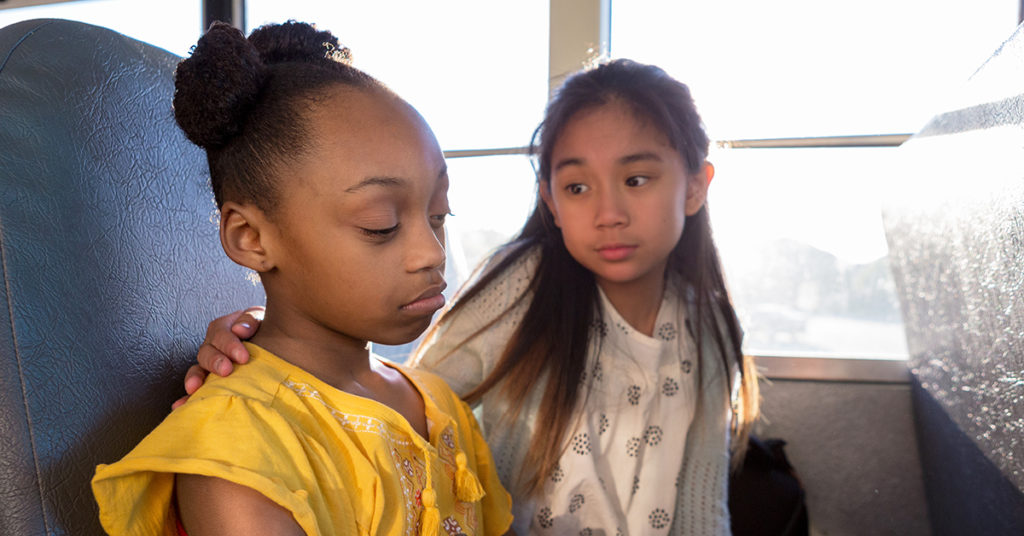 By Deborah Rivas-Drake, University of Michigan

All forms of bullying harm kids, but biased-based harassment—when the underlying cause or motivation is prejudice—causes specific, increased harm.1,2 Racially motivated harassment and bullying manifest in numerous ways, from verbal insults to physical injury. As we see with Kid Kinder® in the 2020 Captain Compassion® comics series, a simple clothing choice can elicit racist comments, so-called “jokes,”3 and worse. It’s difficult to imagine a white 11-year-old being called a thug just because they’re wearing a hoodie.

For children of color, these experiences are far too common. And, given the amount of time youth spend in school, school is where they’ll often encounter racial bullying. It’s important to note that Black children, in particular, bear the disproportionate burden of racially motivated peer harassment in school. According to the most recently available US Department of Education’s Office of Civil Rights data, in the 2015–2016 school year, Black children comprised about 15 percent of the US public school population but 35.5 percent of those who reported being harassed or bullied on the basis of race, color, or national origin; a similar disproportionality can also be observed among American Indian and Alaska Native youth, who are represented among those racially bullied or harassed at a rate twice that of their presence in the overall student population.4

Psychologist Brendesha Tynes, a pioneer in kids’ experiences of online racism,5 found that youth of color, especially Black youth, encounter many of the same verbal taunts and harassment in virtual spaces as they do in brick-and-mortar settings. Kid Kinder’s experiences in the video game—repeated insults and invalidation by Antagotron—are a type of racial harassment. One of the most common stereotypes Black youth encounter online and offline is one of criminality, as when Antagotron refers to Kid Kinder as a “thug.” Tynes and her colleagues have shown that youth are also exposed to explicit imagery and overt assaults, such as derogatory language. All of these racial harassment experiences cause trauma and affect youth long after they’re initially exposed.6

Why It Matters: Effects on Youths’ Mental, Physical, and Academic Health

Bullying behaviors motivated by racial bias harm the physical, psychological, and academic health of their victims. Race-based harassment and bullying places youth of color at greater risk for depression, substance use, and truancy.7 Kids who are the victims of peers’ bias-based language—such as being called names—are four times as likely as those who don’t have this experience to feel sad, and about three times as likely to lose friends and avoid school and activities.8

Helping Our Kids Be Anti-Racist Upstanders

Parents and educators: Now is the time to help support the development of anti-racist upstanding skills in our youth.

In supporting our kids, the first step is for them and for us to recognize racism for what it is. We must believe kids when they share their racist encounters—whether they happen online or in person. We must also attend to the complex emotions left in the wake of such encounters.9

Some bystanders, like Zoey in the Captain Compassion comics, will recognize racial bullying right away as a manifestation of racism. But other bystanders won’t, as we see with Ari in the comics. So, a critical step toward anti-racist upstanding is teaching young people that racially motivated bullying is a way that racism is showing up in a particular space.10 If they don’t have them already, we want to give our kids the language and tools to deal with racism. We need to impart the clear understanding that racial bullying is not just a joke or merely unkind, but rather that the ultimate goal of these behaviors is to subordinate Black, Indigenous, and other people of color, as the case may be.

Kids who are learning about this secondhand or who witness it indirectly, such as Zoey and Ari, may be sad or angry that their friends have been hurt in this way. Developmental psychologist Josefina Bañales and her colleagues have shown that youths’ feelings of anger about injustice can be an important step on the path to anti-racist behaviors such as challenging a peer who makes a racial joke or uses a racial slur.11

A critical next step is to catalyze these emotions about injustice into action. Youth have the power to stand up to racism as it manifests among their peers. As adults, it’s our collective responsibility to model this upstanding behavior and guide young people as they stand up to racism. Here are some key actions you can help youth be prepared to take, depending on the circumstances:

There’s a long road ahead of us, but together, we have the power to stand against racially motivated bullying. Learn more about how you can get started at CaptainCompassion.org.